That old adage of the apple not falling far from the tree.

Some 10 days ago, very randomly, the 13-year old Dinoboy casually asked if I would take him to buy some spray paint cans. Now I instantly thought "Oh, he wants to have a go at graffiti art." So I prodded some more and asked a ton of questions. After several monosyllabic replies to my inquiries, he eventually said that he didn't want them for graffiti art and that he just wanted to have a go at spray paint art. Also, he intended using his saved up pocket money to purchase said cans. I have to admit, I was initially a little skeptical.

Off we went on Saturday to scope out a couple of specialist spray paint shops in the city. He went in asking for a very specific brand of paint. He had obviously spent some time researching this online. When the chap in the shop asked "So you've used those paints before?" and got a "No" from Dinoboy, I got a raised eyebrow look from the chap who then proceeded to try to steer Dinoboy towards more 'beginner' paints. Dinoboy was having none of that - he knew what he wanted and his mind would not be changed.

We left the shop sans cans since they didn't have any of the ones he wanted in stock. So we traipsed on over to Hobbycraft where he bought 4 pretty pricey Plasti-kote cans and some foam-board to start with. I had decided I wasn't going to interfere - it was his project and he obviously knew where he was going with this. We got home and he went out into the back yard to set up his new stuff. I left him to it and went off to do some chores.

When I came back some hour and a bit later, he proudly showed me this. 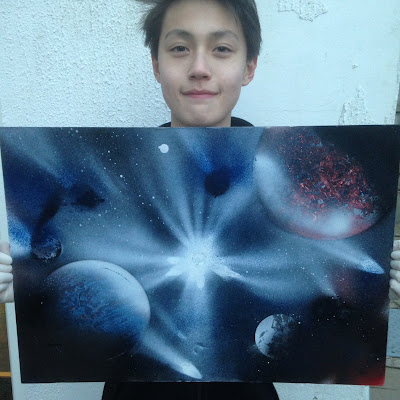 I was stunned to say the least and he was so proud of what he had achieved - so was I! It was the first time he'd ever picked up a spray paint can. Pretty awesome first painting, right?! Once he started, there was no stopping him. Here he was the next day making more art. 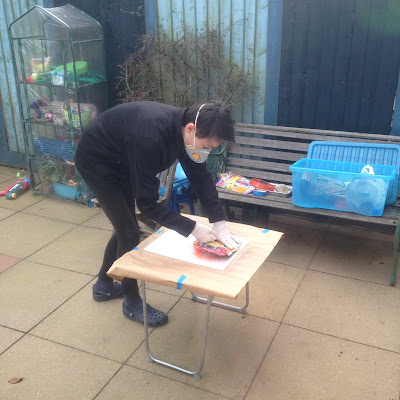 This is his piece from Sunday afternoon. His second ever painting. He'd gathered a whole bunch of supplies, raided the recycle tub for pot lids and took possession of my old painting palette knives and sponges. 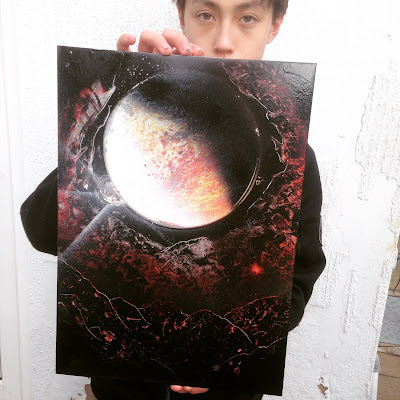 So far he's done 4 paintings - the third one was a bit of a dud because he hadn't accounted for a slightly faulty cap. It is very encouraging to see him pursue this creative outlet. I have so far steered clear of experimenting with his cans - I want this to be something he 'owns'. This is his art. 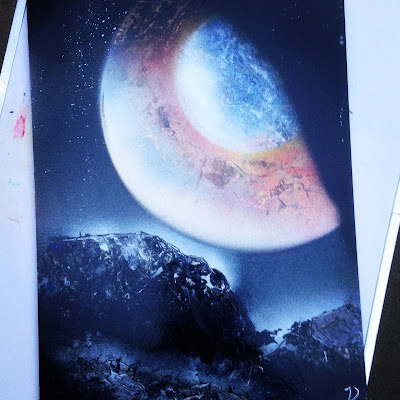 Here is the last one he did just the other day after he got home from school. He did his homework first, then headed outside with his box of supplies to paint. He was still outside when I got home from work. I believe he is only going to get better and better with practice. I am hugely proud of his initiative and his obvious talent.

I hope this interest continues. He was talking the other day of possibly selling some of his work to pay for more cans of paint. His sister has already bought a foam board with her pocket money and has asked him to paint something for her.

I hope your week has been going well. The weekend is almost upon us, friends. What are you up to this weekend? I will be at work instead of being at market this Saturday as we have an open day happening. Until next time, happy crafting!

Labels: Inspired by others, kids