I know Christmas might seem ages away yet but ...

... I am nowhere near my pledged target of 24 woolly hats for the Operation Christmas Child project.

I need to back up a bit and tell you about how I got started on this. Last Christmas, a colleague at work introduced us to the Operation Christmas Child project. This organisation asks people to donate a shoe-box of gifts for children in under-priviledged parts of the world. The idea is that you would wrap up a shoe-box, fill it with gifts for a girl child or boy child of a particular age and take it to a designated collection point. The OCC staff will then collect the boxes, take them back to their warehouses, check the boxes are OK and the gifts suitable, then they send the boxes to children in Africa, Eastern Europe and Central Asia. My colleague started volunteering at the local warehouse in our region at the beginning of this year. She told me that often, the boxes they received would be under-filled or perhaps filled with inappropriate items. She said that OCC needed hats and other simple items as back-up / filler gifts. So I had this big idea that I would make some woolly hats. There was just one big problem, I do not knit or crochet.

A fellow crafter suggested making hats using a loom. I figured I could do that. Have you seen a round loom before? Here is the small loom I started off with. 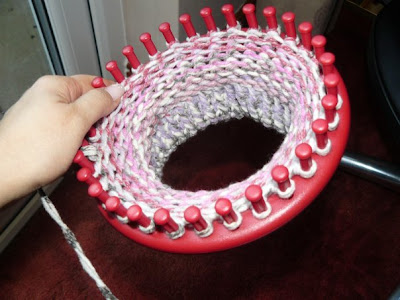 With a loom, I can make these hats. 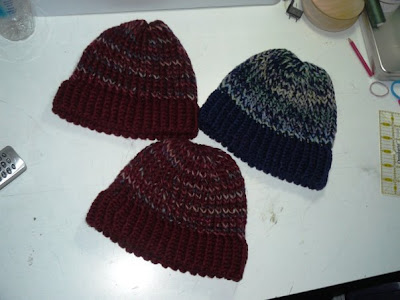 Or these hats with the pom-poms. 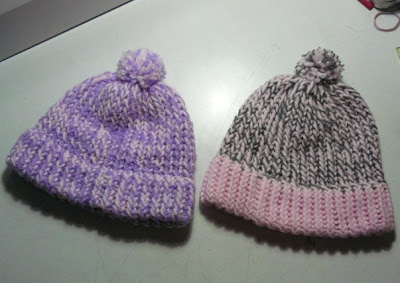 They look really cute on kids. Here's one on my son, DinoBoy. 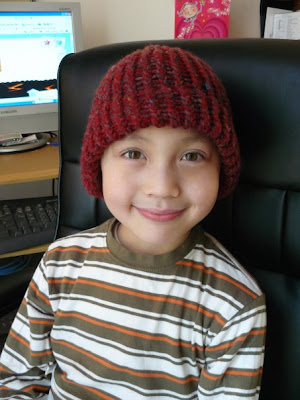 I've made 9 hats so far. I still have some way to go! The good thing is they're quick to make.

After my big idea about making hats, I had another big idea. Haha! You'd think I'd had enough of the big ideas right? Well, this time, I thought I could sew simple drawstring backpack bags for the OCC boxes. I tell you about those in the next post.
Posted by Ady at 18:27