I've finished the crocodile stitch neckwarmer which I was showing you in my last creative space post. I've got to take a few photos first and I'll post it up hopefully tomorrow.

In the meantime, here's what's on the crafting table right now. 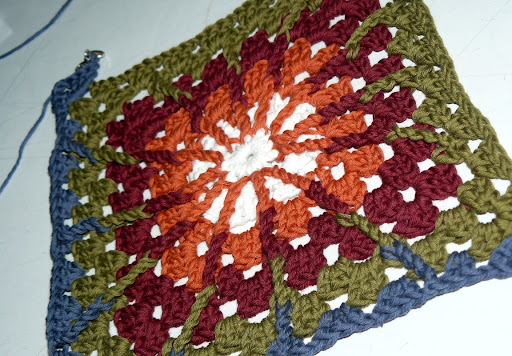 I was inspired to try this after I saw Fiona's wonderful square here.
This one is my attempt at the square. 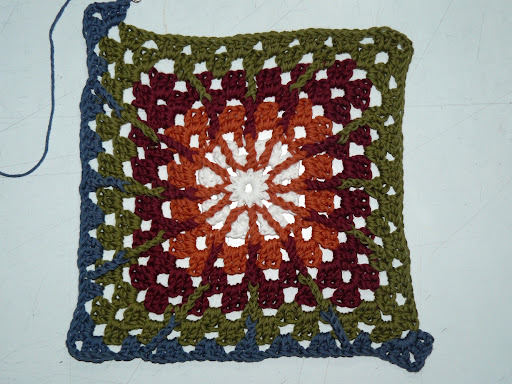 There is a crochetalong group on Ravelry called 2012 Crochet Block-A-Month. The idea is that the group do two blocks a month from nominated patterns. March's filler square or block was the Double Treble Burst Square by Amelia Beebe. The free pattern plus 150 projects made by Ravelry members can be found here. This is the pattern I used for my square. I have too much going on to commit to a crochetalong right now but I hope to keep this in mind and join it next year from the beginning.

I'm having fun doing this square - it's so pretty and I am very happy with my colour choices. I'm working this using 5 different colours of Twilleys of Stamford's Freedom Sincere DK cotton yarn. I'm going to make as many of these blocks as my stash of Freedom Sincere yarn will allow and then join them together with a contrasting yarn. Hopefully I will have enough blocks to make a lap-blanket or something similar.

It's cold, wet and a little miserable here this morning. I hope it's better weather where you are, friends.

Linking up with other creative spaces here later on.