When we were in Malaysia, Dinoboy and Missy Moo accompanied their cousins to a place called Kidzania. Kidzania is a children's entertainment center providing a safe and fun environment which allows children to "work" in adult jobs and "earn" currency. The Kidzania we went to was a child-sized replica of a city with buildings, shops, restaurants, radio and tv stations and a theater, as well as vehicles and pedestrians moving along its streets. In this city, children can play at pretend work in branded activities from working at a MacDonalds restaurant, to manufacturing Oreo cookies, bottling water in a Seamaster plant, being newspaper reporters for Berita Harian (local Malaysian daily newspaper) or an anchor-person for a tv show or radio show, or a courier for PosLaju (Malaysian post office).

The children earn KidZos currency while performing the tasks, and the money is kept in the KidZania bank for children to spend at the gift shop and on non-free KidZania activities. My kids had a total blast. My cousin's twins who are 11 go there a lot and have heaps of fun every time. I was impressed by the educational benefits. At all times the Kidzania supervisors (each activity is the same - you meet an adult supervisor, they give you instructions, you dress up appropriately and follow the instructions to complete a given task) guide the kids and the parents have no input whatsoever. As a matter of fact, parents have to stay outside the zone of each activity. There are signs which say "No queuing on behalf of your child please as queuing is part of the learning experience". However the cynic in me grimaced at the re-staging of corporate consumerism targeted directly at kids - but then again, that's life, right?

When we got there, the kids had to go through 'Immigration control'. They were after all entering a very special nation. They got special passports, a 50 KidZo cheque to cash in at the bank to kick-start their earnings and a special magnetic wrist-tag which identified them. 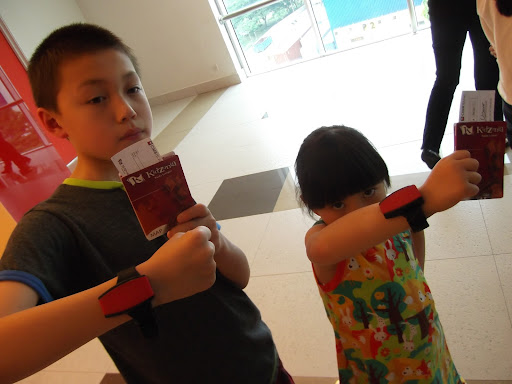 Dinoboy wanted a drivers license so he could drive the electric cars in the Honda car dealership. However, in order to get one, he first had to go get an eye-test, then he had to go buy some insurance from the Alliance insurance company. Once he had these two things, he could go take his driving test to get his license. Here he is buying his insurance. 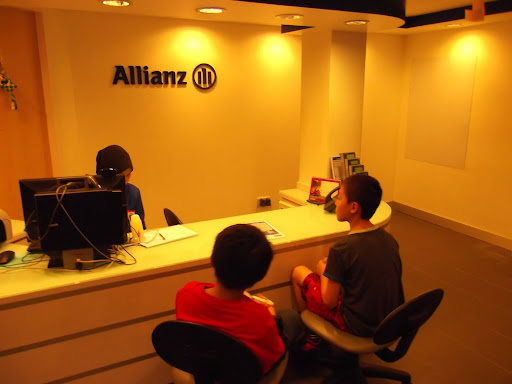 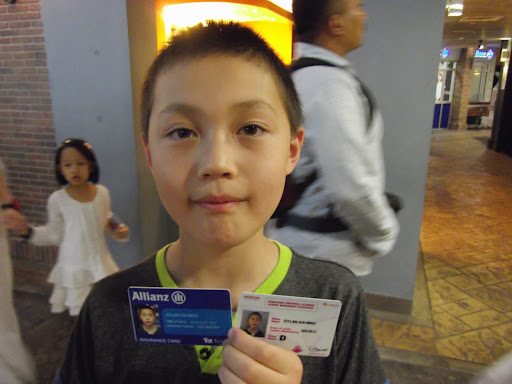 Missy Moo wanted to be a firefighter. So off she went. She queued patiently for 40 minutes to take part in this activity. Can you spot her? Do you see that photographer to the right of the photo? OK - here's one of the ways Kidzania makes its money. Since parents cannot enter the activity zones, they can only take pretty rubbish photos. There is a whole platoon of official photographers who go around taking official shots of the kids doing their 'jobs' and then scanning their wrist tags to match the photos to the kids. On your way out at the end of the day, you have to walk past the official Kodak photo center and there you can scan your child's tag and up pop these awesome photos for you to purchase at extortionate prices. (No I am not bitter - honest!) 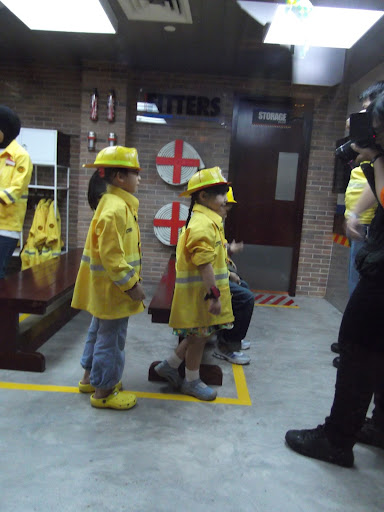 Once they got their video briefing from the Chief Fire Officer, the firefighters all got into this cool fire engine. Sirens blasting, they cruise around the city streets towards the 'fire'. Spot all the parents standing around waiting for their kids. 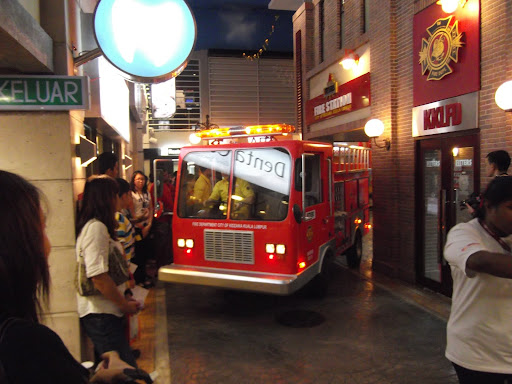 At the Hotel Flamingo, the firefighters must put out the faux fire with their real water cannons. Seriously - how much fun is this?!! 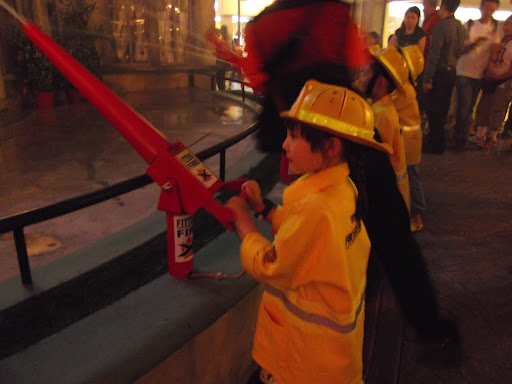 Missy Moo got paid for her service at the fire station and hopped off to her next 'job' as a CSI! They queued again, then got a briefing about a crime. Then they got kitted out in their outfits, got their evidence cases and set off with instructions to go collect some evidence. The evidence was collected and returned to CSI command and analyzed using the computers there. Once the crime was solved, the task was complete and the kids got paid. 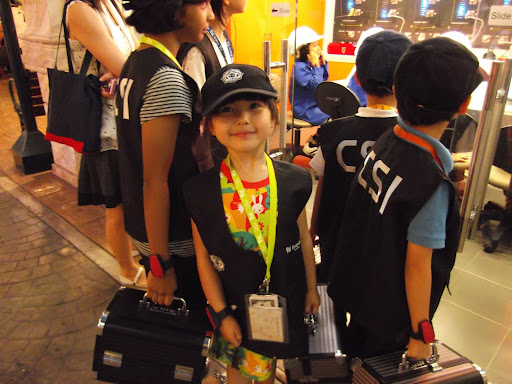 Some of the brands provided miniature versions of their processing plants - for example, the Seamaster water bottling room had a complete working processing plant which allowed the kids to extrude a plastic bottle from a form, sterilize it, fill it with water, run a check for purity, then have the bottle sealed and a heat-shrink wrapper put on. Each kid had a bottle to take away as a momento. 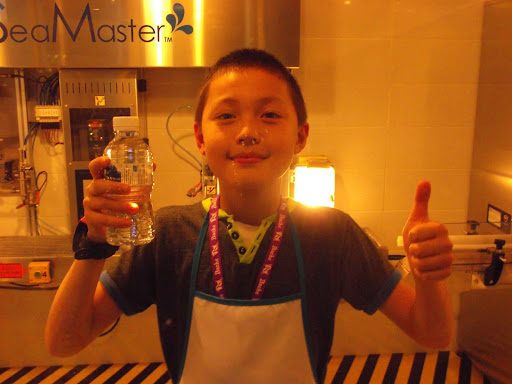 Dinoboy wanted to work in the Dell laptop manufacturing room. He completed a task on a laptop and then 'assembled' a laptop. 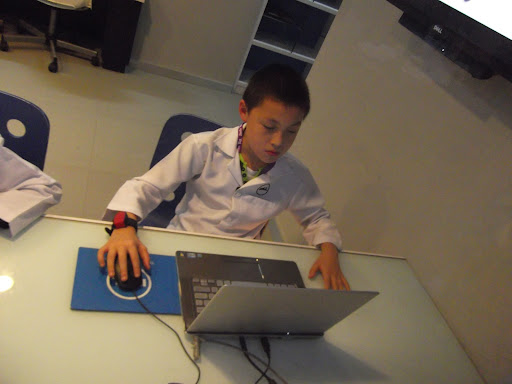 There was also a hospital. Spot Dinoboy as a surgeon, operating on some poor crash-test dummy who needed a tumour removing. He was supported by anesthetists, surgical nurses and a Kidzania supervisor. 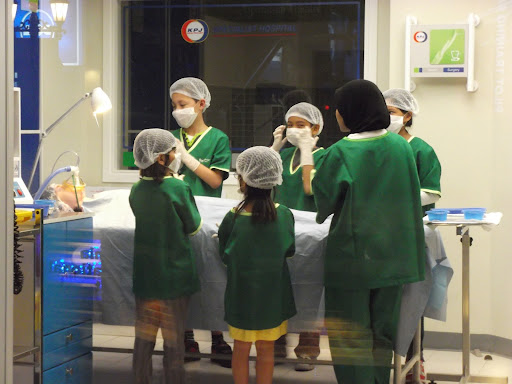 The kids spent a bit of time at a building site learning about construction. This is an official photo (I caved in and bought one photo at the end of our day) of the kids taken by one of the official photographers. 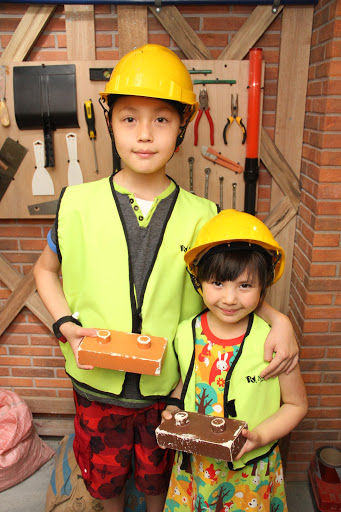 One of Dinoboy's first jobs in Kidzania was as a courier. It was in his words "quick and easy money" as you only had to deliver a few packages to get paid for the task and they always had packages needing delivery. 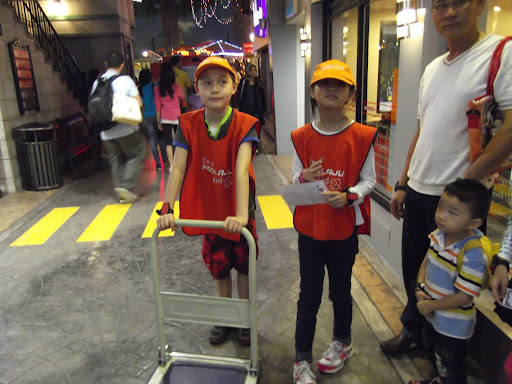 Missy Moo spent some time in the Nursery playing with the 'babies'. She was very keen to do this job because it involved the wearing of pink lab coats. Typical Missy Moo that is. That's her with the bow in her hair. 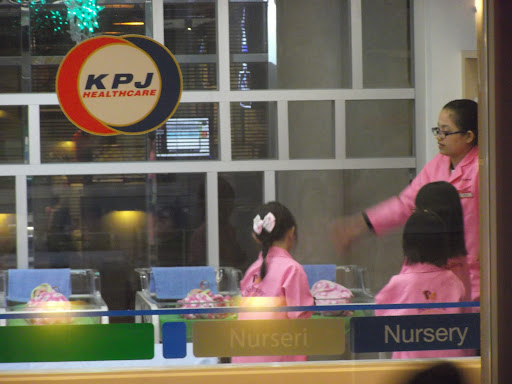 The kids took part in many more jobs but I couldn't get close enough to take photos. Missy Moo had fun being a flight attendant on an AirAsia flight, serving up dinner and coffee from a proper trolley. Dinoboy got to drive a Honda car and train as a secret agent. There were over 55 activities that the kids could choose from to do. We got there when it opened for the day (10 am) and we left when they closed at nearly 5 pm. The kids had only managed to do about 10 or 12 jobs in that time. I can see how my cousin's kids love making repeated trips there during the school holidays. Before we left, we stopped by the gift store so they could 'purchase' items with their earnings. Parents again were not allowed in. The kids had to work out how much they had earned and what was affordable.

As it was Missy Moo's first experience, I felt the need to hover close by to provide guidance whilst she was queuing. However, should we return there in a couple of years' time, the kids will be more familiar with the process and will require little or no supervision from me at all. It is at that point I think I might just take myself off to the 'Parents' lounge' and perhaps bury my nose in a book whilst sipping my latte ... or maybe have a manicure - or even watch TV to while away the hours my kids will spend having fun in what they reckon must be the best dress-up playground ever.