Fancy some granola? I do!

Inspired by a friend’s comment that she had made some homemade granola, I had a go at making my own. At the end of my granola-making session, I had two questions:
1) Where have I been all this time that I didn’t know about granola?? (You’re probably thinking that too aren’t you?!)
2) How can something this easy be so darn yummy and why do they charge so much for those fancy boxes of granola in the supermarket?
Sorry – that was really 3 questions.

I have a confession … as much as I love fresh grapes, cranberry juice and cherries; I seriously don’t like the dehydrated versions. So I am therefore not a big fan - actually not a fan at all – of raisins, currants, sultanas, dried cherries or craisins / dried cranberries. Some of you will probably think I am bonkers for disliking dried fruit – but that’s just me, I’m afraid. I’ll always remember that quote in the movie Benny and Joon where there is a discussion about raisins and Joon says “They used to be fat and juicy and now they're twisted. They had their lives stolen. Well, they taste sweet, but really they're just humiliated grapes. I can't say I am a big supporter of the raisin council.” I couldn’t agree more, Joon. Anyhoo – I digress. Sorry.

I like muesli … but the boxes of muesli from the shops pretty much always come with dried fruit in them (especially raisins and sultanas) and the thought of picking all the dried fruit out of my breakfast cereal every morning drains my will to live. It also does not seem like a productive use of my precious time. Not to mention a waste of dried fruit. So consequently, I don’t buy muesli. I never ever bought granola either which I used to think was some kind of posh other word for muesli – after all it sort of looked the same in the boxes.

When I did some online research about making granola, I realised that you could pretty much put in or leave out as much or as little as you liked. So after browsing a ton of recipes and having some idea of what went into making granola in my head, I went to the local health food shop and bought a bag of jumbo rolled oats and a variety of nuts and seed. I pretty much had everything else I needed in my kitchen cupboard.

Here’s what I ended up with and it is totally yum! Now its summer and soft fruits are starting to appear en masse in the local shops, a handful of fresh fruit turns breakfast into something healthy and delicious! No humiliated fruits in sight either. Yay!! 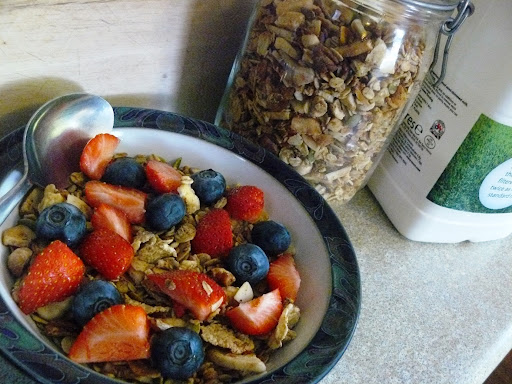 The recipe I used is an amalgamation of a variety of recipes found online.

3 cups of jumbo rolled oats
A third of a cup of almond slivers
Half a cup of desiccated coconut
1 generous cup of chopped nuts of your choice (I used a mix of chopped pecans, brazil nuts and hazelnuts. I bought plain, unsalted nuts from the health food shop)
A third of a cup of seeds of your choice (I used pumpkin seeds.)
Half a cup of banana chips broken into smaller pieces
A generous tablespoonful of flaxseed or wheatgerm (I used flaxseed)
Half a teaspoon of ground cinnamon
A teaspoon of vanilla essence
2 tablespoons of sunflower oil (I guess you could use canola or vegetable oil – some recipes don’t have oil at all but use a lot of applesauce instead)
Half a cup of maple syrup
A third of a cup of unsweetened applesauce (I had a jar of plain store-bought applesauce in my fridge so I used that instead of making my own but I think in the autumn when I can get some windfall apples from neighbours and friends, I might make my own.)

Preheat the oven to roughly 165°C or 325ºF.
Line a large baking tray with greaseproof paper.

In a large bowl, mix up the oats, flaxseed, chopped nuts, desiccated coconut, almonds and ground cinnamon. In a smaller bowl, mix the oil, vanilla essence, maple syrup and applesauce together. Pour the contents of the smaller bowl into your large bowl of dry stuff and mix it thoroughly until there are no dry bits. Tip the mixture out into your baking tray and spread it out.

Pop it into the oven and bake it for 10 minutes, then take it out and gently stir it about to bring the stuff at the bottom of the tray to the top. Pop it back into the oven again for another 10 minutes, then bring it out and stir it about again. I then pour in the pumpkin seeds and banana chips and stir them into the mix. You basically want to bake it until the mixture in your tray is a gorgeous golden brown, stirring occasionally so the mixture browns evenly. This normally takes about 30 minutes or so. Apparently the browner the granola gets (without burning) the crunchier the granola will be.

If you’re adding dried fruits, apparently you should add it after your granola has been baked and is cool. You can also add chocolate chips if you want to the mixture once it has cooled down. The result is a lovely crisp textured cereal with just the right amount of sweetness for me. If you prefer it sweeter, I guess you could add some soft brown sugar to the mixture when you’re mixing it in your bowl at the beginning. This is fabulous eaten with cold milk and a scattering of fresh fruits.

Do you like granola? How do you eat yours? Do you make your own?
Posted by Ady at 22:07