There are lots of reviews here for Simplicity 2599 and PatternReview.com voted it as one of the top patterns for 2010.

I wanted some new tops for work during the summer months. I had seen the ruffled silk top in Boden (see my last post) but was put off by the price. So when I saw this on Patternreview.com and read all the positive comments, I thought I'd give it a go.

The fabric I bought has a bit of a busy print as you can see. At £3 a metre - plus it had the right sort of silky handle I was loking for - it was a good buy. 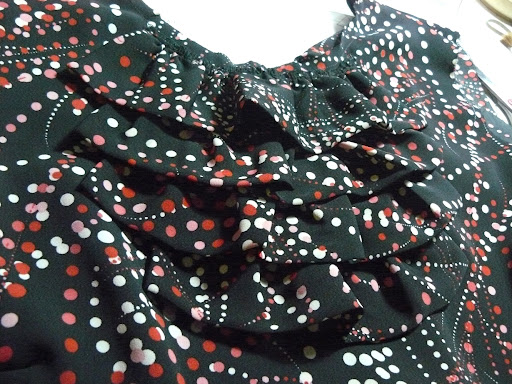 The ruffles sort of get lost in the print. As this was intended to be a muslin, I wasn't too bothered about the print (I actually quite like it) being busy. 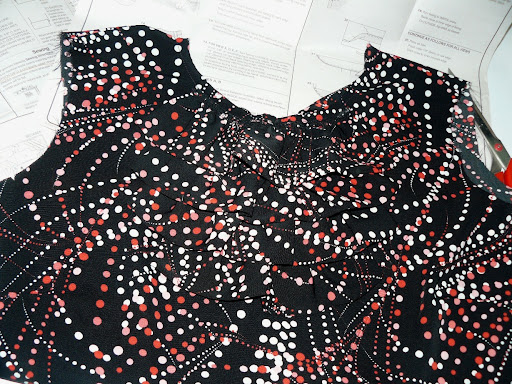 Pattern Description:
Six different designs of tops, with separate patterns for B, C, and D cup sizes. I chose view D which is described as a shell top with three horizontal ruffles under the neckline. Only I added an extra ruffle making it four horizontal ruffles in all.

Pattern Sizing:
The pattern is sized 12 - 20 and I cut a size 16. From my measurements and the instructions given, I cut the B cup pattern. It fitted really nicely.

Did it look like the photo/drawing on the pattern envelope once you were done sewing with it?
Yes it did - except I added the extra layer of ruffle.

Were the instructions easy to follow?
Yes. I was surprised at how easy it was - although I did struggle very slightly with the facing - especially on the front where the ruffles were.

What did you particularly like or dislike about the pattern?
How easy it was, once I tamed the front facing. The neck facing didn't sit flat, even with the understitching. And the ruffle stuck out like one of those funny dog collars the vet gives your dog when they want to stop the dog scratching. It could be due to the thickness of the double layer ruffle (each ruffle comprises a double layer of fabric). I rolled the facing forward a little and 'stitched in the ditch', tapering the roll of fabric off towards the shoulder seam. This left me with a section at the front neckline which looks like it's been bias-bound. I might actually use bias-binding on the neckline next time instead of the facing.

Fabric Used:
A cheap polyester silky handle fabric - it's a woven. I have a feeling it's a polyester crepe de chine. It doesn't crease at all and feels lovely on.

Pattern alterations or any design changes you made:
I added an extra ruffle but made it slightly shorter than the other three.

Would you sew it again? Would you recommend it to others?
Yes! I will most definitely sew this again, and possibly one of the other views, although I do really like this one! And YES - I wholeheartedly recommended this pattern.

Conclusion:
I love this pattern! I've actually finished this top and will wear it to work today. Hurrah for wearable muslins! I didn't get a chance to take a final photo of the finished garment last night. I'll do that as soon as I can.